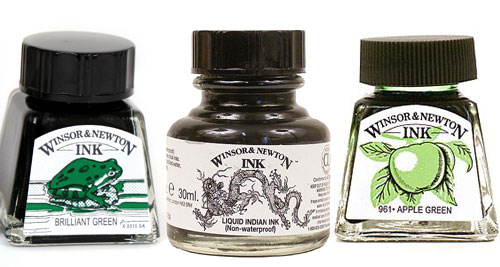 These are the ink bottles of Winsor & Newton and I just really like them. I don't draw a lot with ink but the few bottles I have of them are standing on my desk, most of the time just to look at. It's the drawings on the bottles I love: each colour has a different drawing. Some of them are beautiful and others I think are funny. Winsor & Newton has 26 drawing inkt colours and one day I would like to have all bottles! Not really to use, but then I have all the drawings for inspiration!

And the boxes the bottles are in are just as nice. 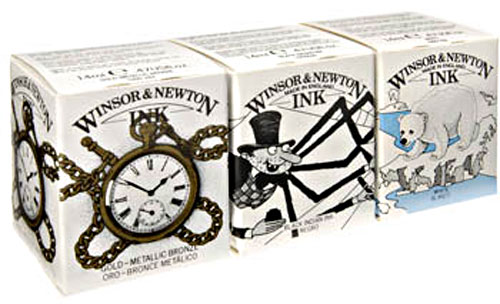 for the good times and the bad times 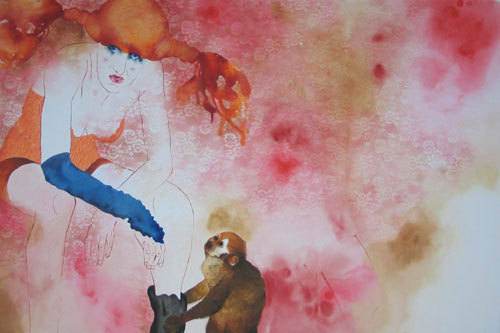 The second painting about a "grow up-kind of-pipi-girl" is done. There's a lot of empty space in this painting, which is new for me, but I think I like it here... This pipi doesn't look very happy, maybe she is done with the whole pipi-stuff, haha! She has become to old for it. And the poor little monkey just wants her attention.
Posted by Unknown at Friday, January 28, 2011 5 comments: 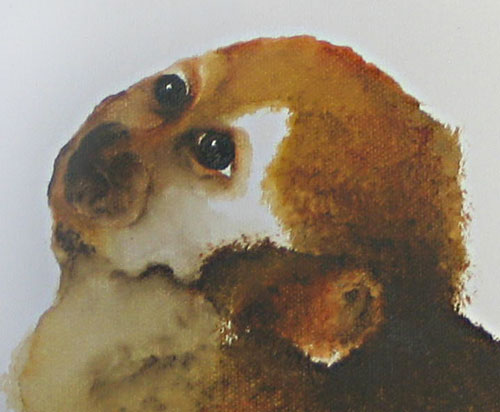 I started my second painting with the monkey and the red-hair-girl. I hope I can finish this one this week!
Posted by Unknown at Tuesday, January 25, 2011 4 comments:

Today I went to the Ludwig Forum in Aachen (Germany). It's a museum for modern art and they are now showing work of Pawel Althamer. He is a polish artist who won "The Aachen Art Prize". I really like his sculptures, but the exhibition was a bit disapointing. The museum is preparing for a big exhibition in march so a lot of ereas are closed. But Art Prize is a big thing and they have only three works of Althamer: the film "the golden knight" and the same-titled sculpture and a installation, which you could see in the neighbouring church.
The funny thing is, as I was studying in Basel (Switzerland) Pawel was a guest teacher at the academy in the year 2003. I remember that he didn`t say very much, but he told us that he thinks that walking is very important to watch and observe things, especially in the city. So he made us walk through Basel for three days! At day three the most students didn't even show up. He told us that he had organized a exhibition in "Stadtkino Basel" and we had to make sculptures out of clay, inspired by our walks. So the picture below shows the weird baby-thing I made in his workshop. The baby is holding a plastic bal with a dog inside. I don't know what I was thinking, but making sculptures isn't my calling, haha! I didn't speak a lot with Pawel, but the weird thing is that I remember his workshop and walking through the city. 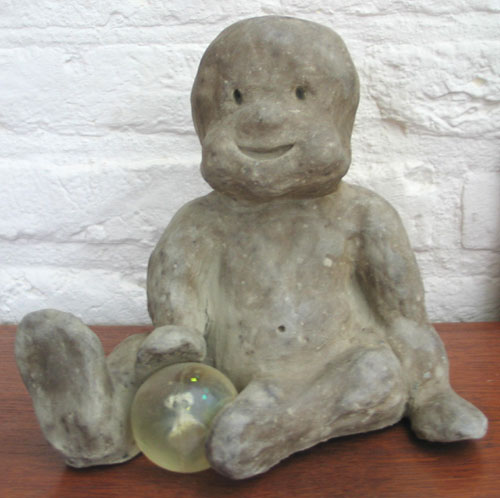 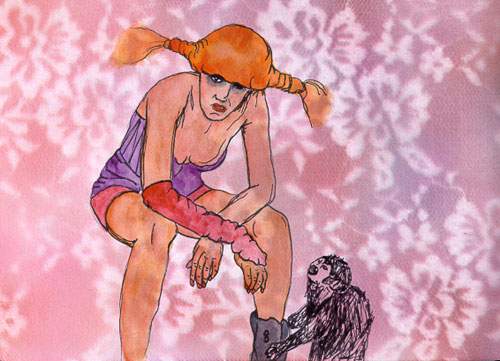 I made another sketch today for a painting, with the same figures: the red-pipi-hair-girl and the monkey. I think I make 3 or 4 paintings with them and then see how it works. Sometimes I like it to work a bit longer with the same characters, but make them different from eachother everytime. They become a sort of friends. And although the paintings have the same figures, they each tell another story.
Posted by Unknown at Wednesday, January 19, 2011 3 comments:

the doubt will creep and crawl 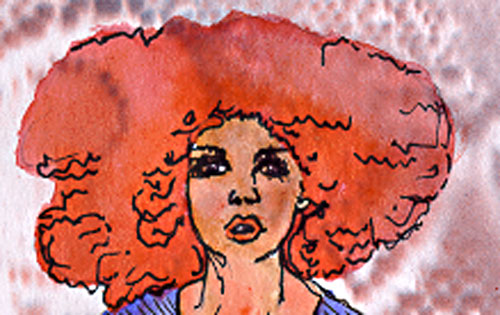 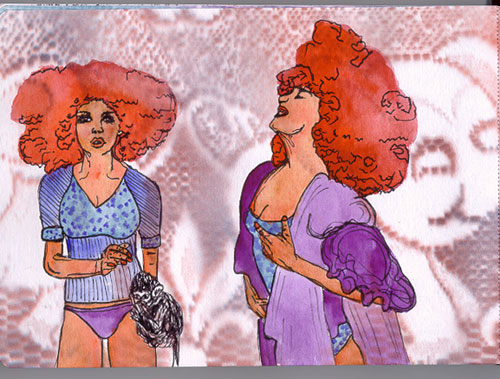 I'm always very doubtful about my work. If I finish a painting I'm happy and pleased with it, but that feeling disappears after 2 or 3 days and I' starting to criticize it. But on the other hand I think that is a good thing, it keeps me going. If I was only happy with it I could just might as well stop, because it would be perfect. So to start the week: a new sketch to keep me going!
Posted by Unknown at Monday, January 17, 2011 5 comments: 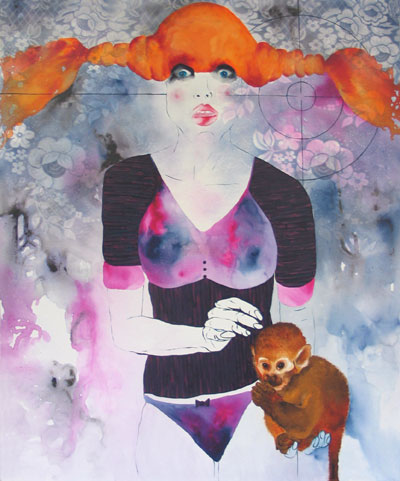 I finished my painting. I'm actualy surprised how cute the monkey has become. Now I can spend the weekend thinking of a title for it. I don't like it if a work is "untitled". I'm always dissapointed when I read that in a gallery or museum. A title can give a work another dimension or you learn somithing about the artist.
And I'm thinking of making some more paintings with this figure and the monkey, I already started sketching so we will see...
Below a close-up of the monkey. 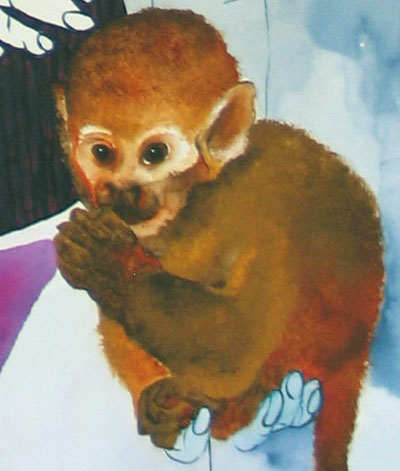 Email ThisBlogThis!Share to TwitterShare to FacebookShare to Pinterest
Labels: painting

what is learnt early... 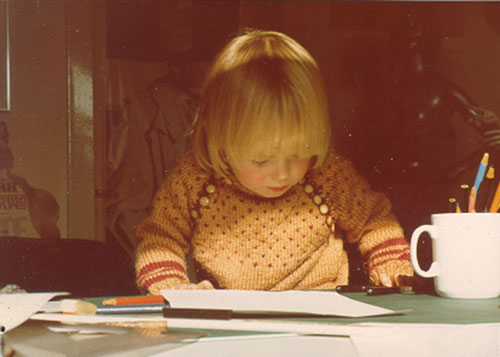 I found this picture of me drawing at the working table of my dad. I think I'm 3 or 4 years old. My father is a graphic designer who used to work a lot at home in his studio. I look very concentrated...
Oh, and my painting is almost done!
Posted by Unknown at Thursday, January 13, 2011 3 comments:

preview on my new painting 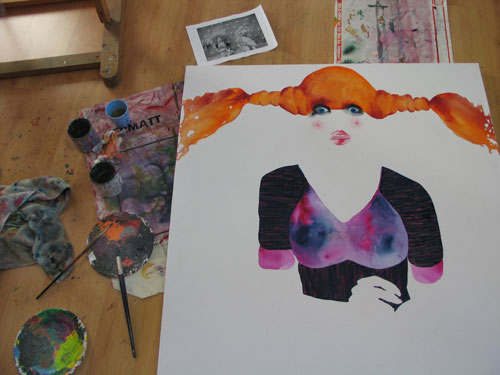 yesterday I worked on my new painting. Although I do have a easel, I like working on the floor. It's not very good voor my back or knees. I tried to work with the canvas on the easel, but it seems impossible at the moment. It's my favourite way to paint so I have to deal with the uncomfortable position. As I write it down it's sounds like a very conflicting way of working, haha. Anyway, I hope I can finish this painting this week.
Posted by Unknown at Tuesday, January 11, 2011 7 comments:

don't be afraid of the big bad wolf 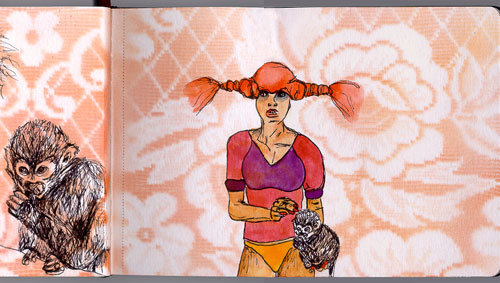 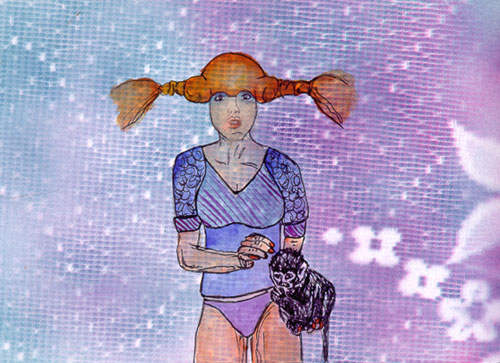 Today I made some sketches for a new painting. I hope I can start painting tomorrow. I have never draw or paint a monkey before, we will see what that's going to look like...
Posted by Unknown at Sunday, January 09, 2011 3 comments:

in a world of puppets 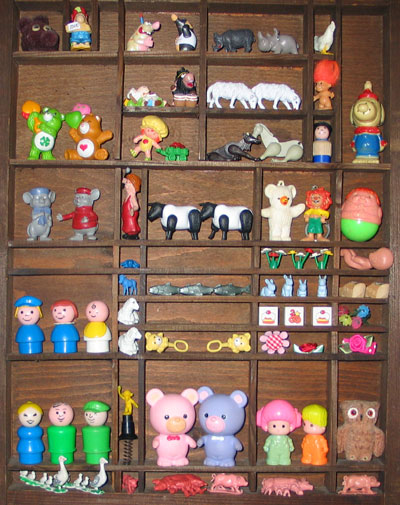 In the last publication of the magazine FLOW, there was an artikel about Karen Saaman. She is the owner of Popjes Art and she gets inspired by vintage dolls of the sixties, on her website and shop you can find the dolls, but also cards and buttons. The magazine printed a picture of an old vintage cabinet where she had put het dolls and figures in. And I remembered that I have the same kind of cabinet on the attic! This is a great idea to put all my old puppets in my room again. I had them now all in different boxes and somethimes I would look at them. This kind of stuff makes me happy!
On the small picture below  you can see the whole cabinet, as you can see I still have some room left!

shoplift a thought or two 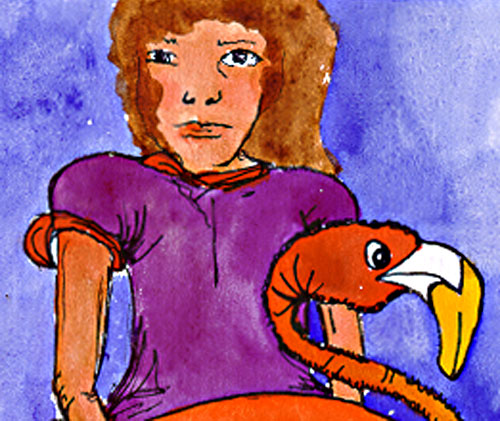 At the moment I'm drawing all kind of figures/situations/animals (real or plastic or stuffed animals), beacause I don't know how to go further with my paintings. Trying to figure it out I'm just drawing from magazines and photo's, but I guess it's time to just start a new one and then see how it goes from there. I haven't paint for the last few weeks and I'm always a bit afraid to start again...
Posted by Unknown at Tuesday, January 04, 2011 2 comments:

I wanted to make a different kind of sketch of my rabbit Pollock: make him black and then draw with white inkt and paint the details. Well.... that didn't work out very well! The inkt was to thick for my pen, so I used a brush and then in turned into a white mess. On the other two rabbits I used a ordinary silver pencil, but  that on the other hand you can't see very well. And now with the red and pink background, it seems like you see the rabbits in front of a big firework (my fantasy got influenced by the time of the year...) with bright light. With a little bit of imagination the sketch still works, kind of...
Posted by Unknown at Sunday, January 02, 2011 4 comments: