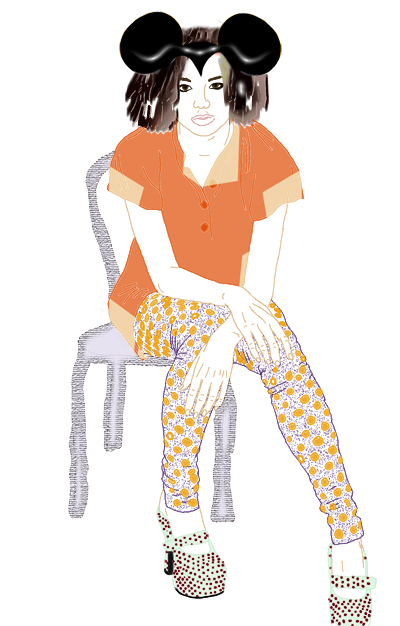 Please don't judge me: tomorrow morning I'm leaving for a trip to Disneyland, Paris. I'm going with some family and friends, we're staying in a small house, so that will be fun! Actually I'm not that into Disney, the most movies I find to "sweet" (but I like to see how they animate the drawings and see them make the drawings). But I realy like amusement parks, especially  roller coasters. So I wish you all a nice weekend and untill next week!
Posted by Unknown at Thursday, February 24, 2011 8 comments: 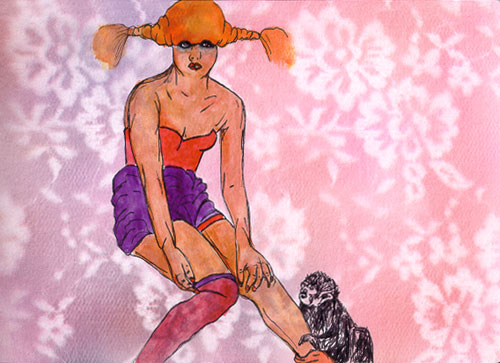 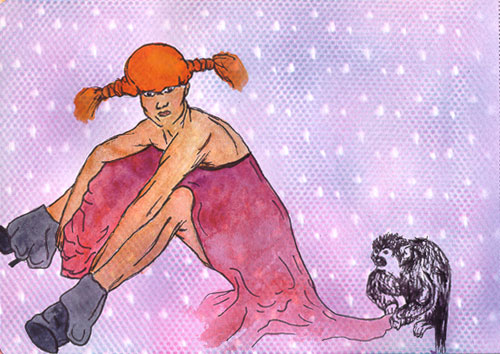 In the meantime I'm still working on my "pipi-girl-monkey-paintings". These are some sketches for the paintings I'm working on at the moment. So I'm working on some different things at the same time, but I like that. It gives me new ideas. Maybe in the future I create a "pipi-rabbit-monkey-girl", haha! 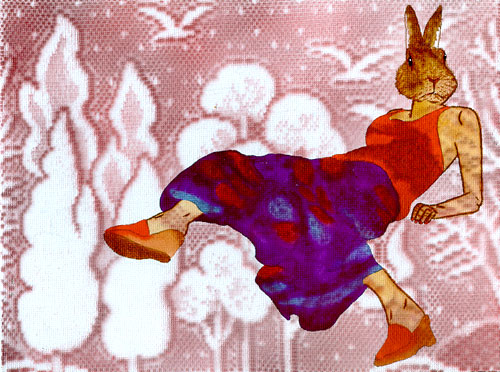 Here is another small painting of a rabbit-girl. I finished it today and I quit like it at the moment to make such smalls works. Just create a small world and think about nothing and let the colour take over. I like the birds in the background. The picture below shows the original computer drawing, I think I made that one in 2009. 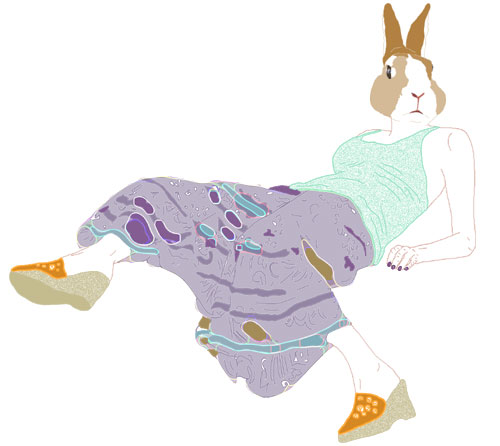 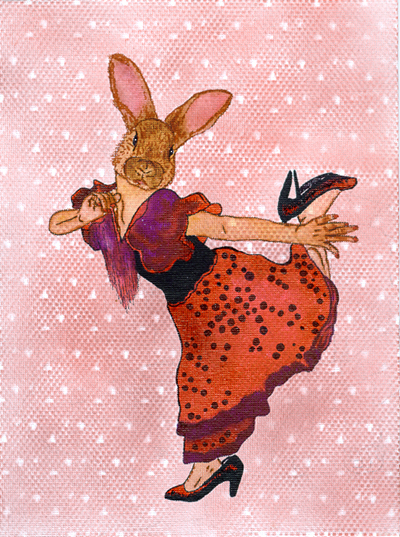 Last week I posted a computer drawing of mine. I was thinking about making a painting out of the drawing.
I did and this is the result. It's a small painting, 24 x 18 cm. Of course it's different then a computer drawing, but I quite like this one as well.
Posted by Unknown at Wednesday, February 16, 2011 6 comments: 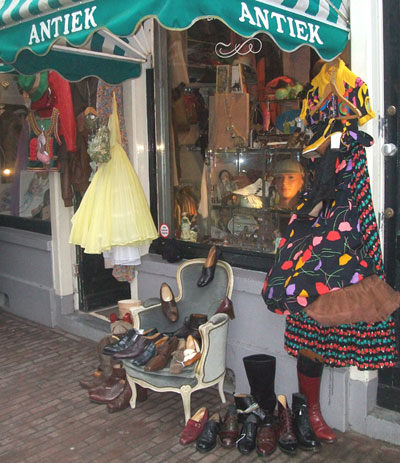 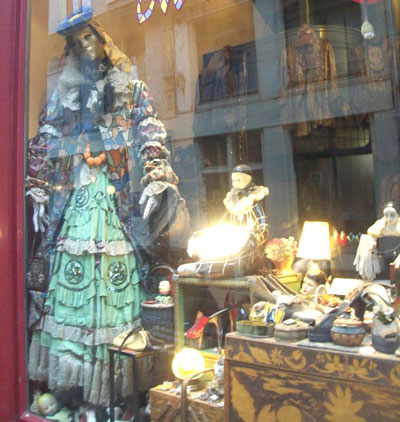 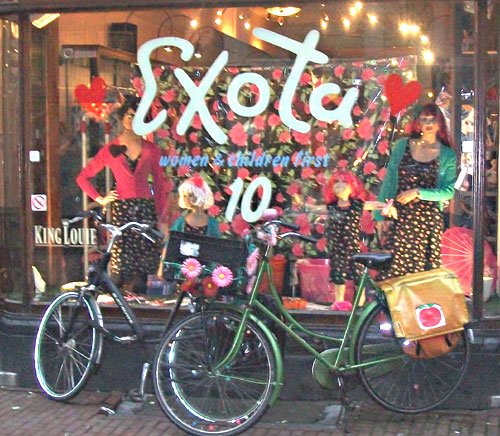 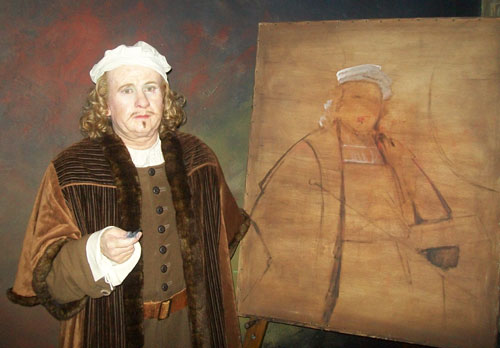 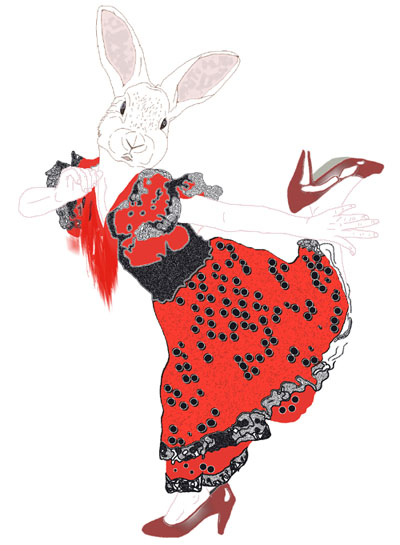 This is another computer drawing of mine. At the moment I`m going through my older work and somethimes I start working on it again, but in a different way. I`m thinking of making a small painting out of it, just to try how it works with paint and airbrush. These computer drawings have a lot of white, which I liked very much when I was making them. This one has actually a lot of white on the left site, so the rabbit-girl is standing in the corner. I cut that of for this post, otherwise you can't see the rabbit very good. In a painting this would change and it becomes probably something else. I like this one, the shoes are much to big for this rabbit-girl so who does she wants to be?
Posted by Unknown at Friday, February 11, 2011 4 comments:

her own little world 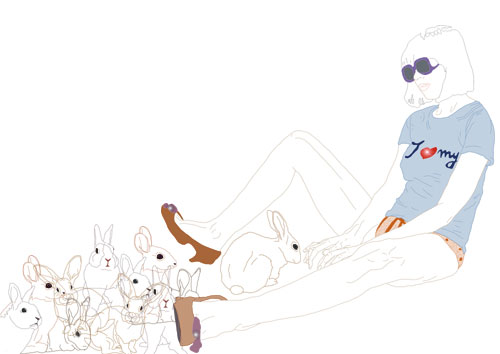 I used to make a lot of computer drawings, which I printed and framed for exhibitions. Every drawing was only printed once. So even it is made on the computer and I could printed as many as I wanted, every drawing is unique and an original. This drawing is special though, it's printed on a bigger size (40 cm x 60 cm) and there are 25 copies of it and numbered. It was made for an online sale and later for an exhibition.
Now I found the extra ones that where printed as a test and I decided to frame one for myself and hang it in my room. I still like the drawing, especially the bunnies: 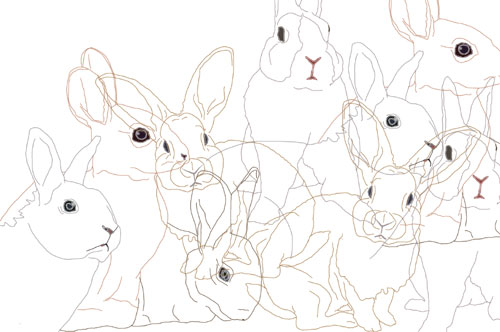 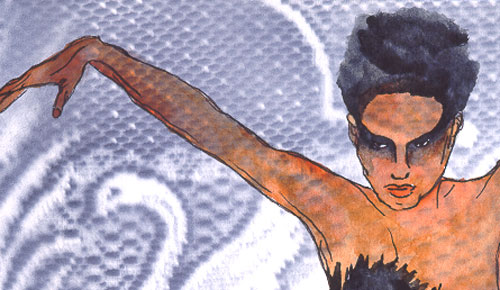 Did anyone see the movie Black Swan? It's now in cinema's in The Netherlands. I quess you heard about it, it's so present in the media. But if not, it's about a ballet dancer who wins the lead in "Swan Lake" and is perfect for the role of the delicate White Swan - Princess Odette - but slowly loses her mind as she becomes more and more like Odette's evil sister, Odile, the Black Swan.
I wanted to be a ballet dancer wenn I was younger, but at the age of sixteen had a complication at my knee  and surgery followed. Bye bye dream! But after seeing this movie I guess I can be glad it didn't work out, haha. If you like ballet you would probably like this movie. I especially liked the dark scene's of the black swan. These drawings are my version of the swan.
Posted by Unknown at Monday, February 07, 2011 6 comments: 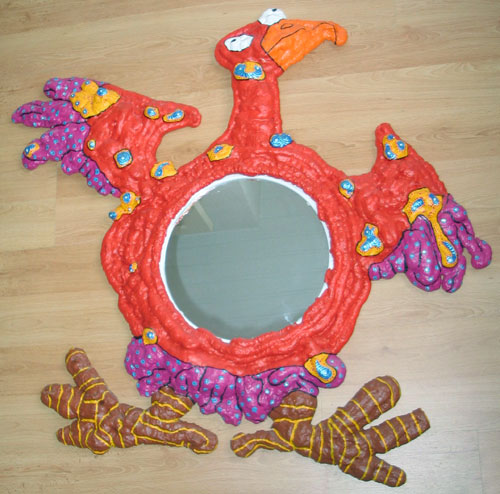 This is going to be a weird post about my toilet, haha! I thought it could use something fun to look at. We have a small mirror hanging on the wall, so I took the mirror and made a bird out of it. I made the bird out of pur foam, it's a great material but not easy to control. I had fun making it and the toilet looks also better I quess ;-) 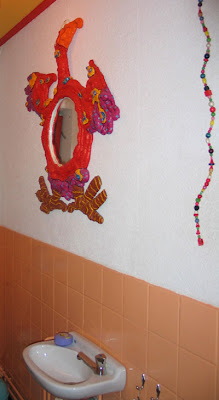 one more or one less

Just another drawing in my sketchbook. I'm not going to paint this one, although it would be fun to make a really big painting of this one: 200 cm high and 600 cm width and then these range of pipi-girls. I imagine it hanging in a big white room. A girl can have dreams, haha!
Posted by Unknown at Wednesday, February 02, 2011 5 comments: