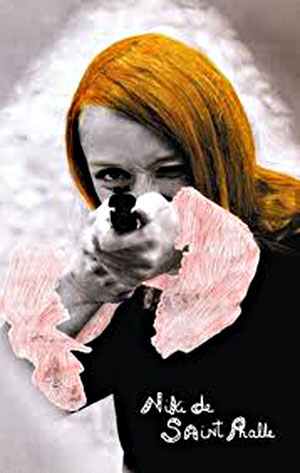 Today I went to the exhibition of Niki de Saint Phalle "Outside-In" at Schunck*, Heerlen. As long as I can remember I'm a big fan of her work. My dad had a book of her work and when I was young I just liked the colours she used at her sculptures: her Nana's.  As I grew up I became fascinated by her life, the things she struggled with. I love her Shooting Paintings, the idea is just great and wonderful that she shot her own paintings. That must have been some happenings! I love her way of feminism: not the pent-up, politically coloured form of feminism, but an unconstrained variant that celebrated a strong perception of woman in a way that was playful and full of humor. For De Saint Phalle, the feminine was first and foremost a mentality, an attitude towards the world rooted in intuition, openness, eroticism and feeling. In her eyes, this mentality does not exclude the rational, conceptual and dynamic that passes as masculine, but incorporates it and utilises the best of it. She believed this synhesis would eventually result in new, better human beings. Such a perception of woman, tending towards the androgynous, was new and provocative at the beginning of the 1960s.
To remind me that I can do anything as a woman and as an artist I have a tattoo of one of her drawings on my arm. It's the drawing of a Nana who has one arm and one wing: it's also a memory of my mother. She was a strong woman and she always said I could do everything I want! 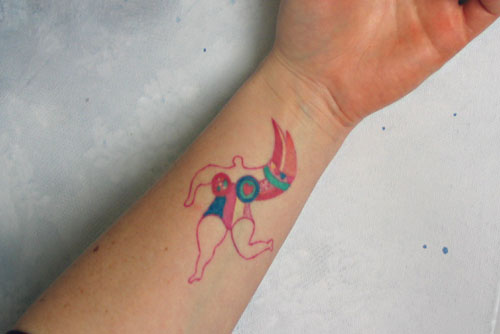