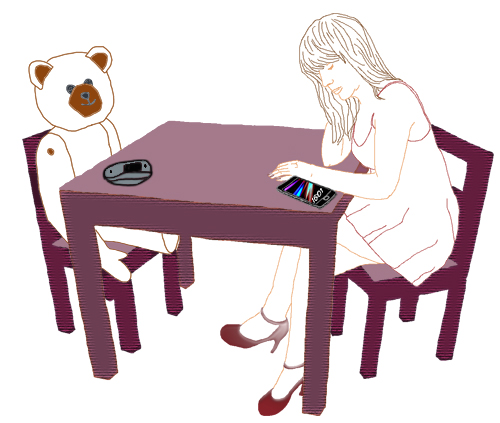 Yesterday I bought a new mobile phone. "So what", you might think, but for me it was a big deal. I never in my live bought a phone. In 2003 I moved to Switzerland for 3 years and my mother didn't like the idea that she couldn't reach me in the train during travelling. So she bought me a phone. I used that old phone until yesterday. People would start to laugh if they saw it, but I call it vintage, haha! And as I told you before, my mother passed away, so this phone became important for me, because it was a thing that showed that my mother cared about me (off course she did!). But now it started to fall apart, I didn't get phonecalls or messages so it became annoying. Well....I had to get a new one. And if I had to, I thought by myself, I might go from vintage to smartphone. So now I'm sitting here trying to figure it out and my Teddy is taking care of my old phone.  Good I still have my Teddy.... I might as well keep the old phone;-)
Posted by Unknown at Saturday, March 17, 2012