A few days ago I watched the movie "nothing personal" by Urszula Antoniak. I think that this movie has some really strong images/stills in it. Especially the one I try to draw in the picture above. But you probably have to know what happens in this scene... (you will have to see it).

The movie is about Anne, she is alone in her empty flat, from her window she observes the people passing by who nervously snatch up the personal belongings and pieces of furniture she has put out on the pavement. Her final gesture of taking a ring off her finger signals she is leaving her previous life in Holland behind. She goes to Ireland, where she chooses to lead a solitary, wandering existence, striding through the austere landscapes of Connemara. During her travels, she discovers a house that is home to a hermit, Martin.
He proposes her to work for him in exchange of food. She agrees but on one condition: there will be no personal contact between them, just work. Soon the two of them become curious about each other and want both: to keep their 'nothing personal' deal and to break it. He knows that breaking the deal and becoming personal may result in her leaving the house. For her, showing any interest in him will equal compromising her radical freedom, which she defines as staying alone and refusing contact with people.

Below a picture of the original film poster and also the still I tried to draw... 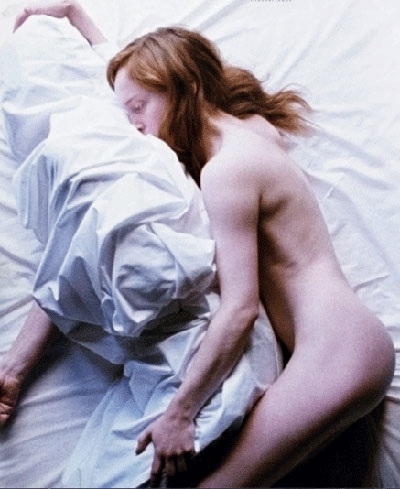